Storefront for Art and Architecture 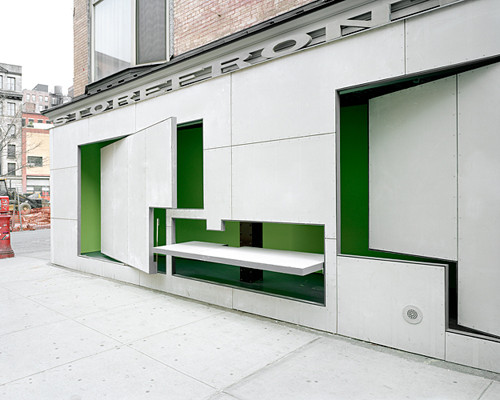 Founded in 1982, Storefront for Art and Architecture is a nonprofit organization committed to the advancement of innovative positions in architecture, art and design. Our program of exhibitions, artists talks, film screenings, conferences and publications is intended to generate dialogue and collaboration across geographic, ideological and disciplinary boundaries. As a public forum for emerging voices, Storefront explores vital issues in art and architecture with the intent of increasing awareness of and interest in contemporary design.

Almost three decades later, Storefront has maintained an important position among the local, national, and international design communities through consistently innovative and experimental programming, and remains one of New York’s only alternative platforms focusing primarily on architecture and the built environment. Storefront is located in a unique triangular ground-level space on Kenmare Street in the Chinatown/Little Italy/Soho area of New York City. Situated on a major downtown thoroughfare between three radically different cultural sectors, Storefront attracts a diverse audience. Nearly 100 feet long, the gallery tapers from 20 feet to 3 feet at its west end.

In 1993, Storefront commissioned a collaborative building project by artist Vito Acconci and architect Steven Holl. The project replaced the existing facade with a series of twelve panels that pivot vertically or horizontally to open the entire length of the gallery directly onto the street. The project blurs the boundary between interior and exterior and, by placing the panels in different configurations, creates a multitude of different possible facades. Now regarded as a contemporary architectural landmark, Storefrontís faÁade is visited by artists, architects and students from around the world.

Storefront most visibly demonstrates its commitment to presenting innovative and provocative work to the public through its acclaimed exhibition program. The format of shows range from single artist site-specific installations, to thematic group shows that address issues from new technology to the social and political forces that shape the built environment. All exhibiting artists are encouraged to engage and experiment with the unusual conditions of the gallery space, from its triangular floor plan to the unique access to the street created by the Acconci/Holl facade. Over one thousand internationally recognized artists, architects and designers have shown at Storefront; these include Peter Cook, Diller+Scofidio, Tony Feher, Dan Graham, Coop Himmelblau, Alfredo Jaar, Kiki Smith, and Lebbeus Woods, among many others.

In 2003, on the occasion of our twentieth anniversary, Storefront organized and presented “The Archive Project,” a major exhibition that transformed Storefront’s archives into a public exhibition. The archive is now maintained as an ongoing scholarly resource for students, critics, historians and others interested in experimental work in art and architecture over the past two decades. The archive is open by appointment to all interested in art and architecture.