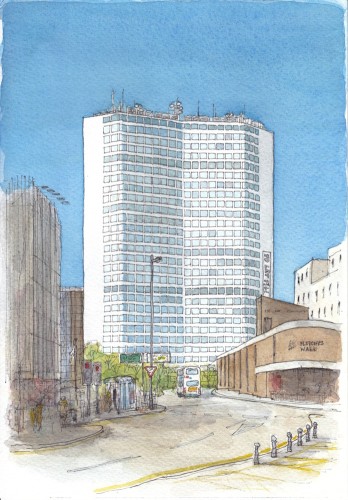 "Drawing on Architecture" The Anise Gallery, Shad Thames, London. May 2014

"Drawing on Architecture" 2014 the Society of Architectural Illustration

Three sketches published in the 28th June 2012 edition of the Architects Journal. Part of the AJ Benchmark Sketch a Facade competition which received 588 entries.
Archisketcher: Drawing Buildings, Cities and
Sketching People: An Urban Sketcher's Guide to Drawing Figures and Faces - Lynne Chapman
publication date Jan 28, 2016 Search Press
Drawing people out in the world is exciting; there is an immediacy and honesty to the art you create, and each sketch contains a host of memories, not just of the individuals captured on the paper, but of the place and the moment in time that the sketch occupied. But it can also be a challenge: how do you spot people who are likely to stay still for you and how do you draw movement, for those occasions when they don't!

Archisketcher: A Guide to Spotting & Sketching Urban Landscapes - Simone Ridyard
publication date Sep 3, 2015  Apple Press
SIMONE RIDYARD is a Manchester-based architect and senior lecturer in Interior Design. In 2011 she became a part of the Urban Sketching community and has since been featured in multiple books on the topic, as well as speaking at their 5th annual symposium in Brazil.

Fellow of the Society of Architectural Illustration FSAI